it's been a little while since I've worked with top-tier crew on a large-budget feature.

the thing that I've been reminded of most, over the first 2 days of the shoot; is that we really are making a MAJOR movie. the crew is BIG, their tools are BIG, the locations are BIG; even the catering is BIG.

although I'm part of a SMALL department (3-4 crew), even OUR gear is BIG.

the reasons make enough sense when you break it all down and look closely.

it's all an attempt to reduce the waiting time.

So I'm pretty much going to be running the most amount of cable in my life on this job, just for the sake of saving a few seconds stress.

eg. run a mic cable 3 different ways onto a balcony, so that if the camera re-sets and swings around to look the opposite direction, I don't need to rush around re-laying the cable, I've already got a 2nd one at the other end prepped and ready to go. When they move inside, I've got the third cable already run up the stairs; ready to plug into, thus saving another few seconds of stress.

it doesn't make the usual stresses go away - Radio reception is getting crippled, quick - re-position the receivers closer to set; but it gives me something to do whilst my boomie is getting set-up, and means I'm ALMOST ready for any eventuality.

I've got a feeling that this blog may devolve into a simple recounting of my day (as I'm not allowed to mention any specifics, or take any photos on set); so I'm guessing that the posts may become less frequent... also when I lose my free-broadband (we move north on the 10th may) there's a good chance I wont even be able to post.

ok, time to go for a walk (it's my day-off, and I've already replaced both my cars rear tyres; at marginally more expense than if I'd replaced the busted one)

any suggestions, questions, or if you'd like to chat, email me ian@thompsound.com or phone me on 0414 468 413 (promise I'll call back if you have to leave a message).

today was a good day.

first location shoot for the film.

first ACTUAL film rolled (it will most likely end up in the final edit).

first chance to see if all the equipment will work in-situ. (kinda does)

we pulled-out all the stops, and totally over-miked the scene (well we actually covered any potential outcomes; and were handsomely rewarded with not f*cking-up)

only toward the end of the day, as we had almost finished packing-up did I need to run around (rapidly unpacking small parts) helping to set-up for rehearsals.

see ya
Posted by Ian Thomson at 7:03 am No comments:

how to have a bad day.

next, it's a good idea to have the horrid rain from the previous day stick around, and amp-up as you run for the car.

of course; no bad day would be complete without you reaching your car... in the rain... whilst running a little late... to find it's rear tire completely FLAT. not low, but flat. My guess is that in the flash-flooding during my extended drive home last night, I hit a stone (1/2 inch) and it lodged into my rear tire.

all in all a pretty shocking start to the day, things can only go up from here; right?

the NRMA guy called back within 5 mins; I had the spare tire (which was brand-new, and fully inflated) out and ready for changing. 5 mins later I'm battling traffic; which wasn't as bad as I'd anticipated.

arriving at the studios (within 15 mins of my estimated soft-call time), I find my security-pass ready to go (no more waiting in-line at the studio-gate....yay)

the day is a cruisy one, no major set-ups; a bit of sitting and waiting, nothing too stressful.

Lunch is skipped so I can battle traffic through the city and pick-up a replacement radio-mic transmitter and capsule from the "local" camera rental house/audio shop.

unfortunately I seem to have completely lost my sense of direction, and managed to take the wrong exit (just after paying a $4.50 toll), somehow I got onto the harbour bridge, and didn't pay another toll (so I guess I'll get a fine?), from there it was smooth sailing all the way.

the rain came and went, and came, then hammered us again, just as we were about to pack the trailer for our first (pre)shoot day outside on Thursday. again; fortune smiled pretty, and we were able to take the trailer into the sound-stage, packing inside.

a quick-trip home, to a new room (upstairs with a nicer view - it's now a brick-wall, instead of nothing).

wandered outside for a spot of take-away ($4 pad-thai chicken - yummm), then returned here to type-up my day.

it's a public holiday (Anzac day) but we haven't yet decided if we'll go in and sort-out some of the excess gear.

Ian
Posted by Ian Thomson at 6:28 am No comments:

Lots and lots, and LOTS of it in Sydney today.

so much that drains were flooding, and there were traffic accidents that made my 750m drive home 45 Min's long.

today was spent sorting out equipment, repairing cables, getting to grips with the huge amount of gear, and ordering supplies.

I washed my car yesterday (just before the rain started ironically enough), and went for a little drive around the local area, as I'm still trying to acclimate to the city.

guess that's it for the moment.

Ian
Posted by Ian Thomson at 8:19 am No comments:

I slept in this morning. guess I was lonely, or bored

when I did eventually roll out of bed, I craved food, and an excuse to explore the city a little.

perhaps it was the sheer number of people scurrying around me as I walked throughout the center of the city, or maybe it was the lack of caffeine in my system (haven't had a coffee since Wednesday); but for some reason, I was getting very used to the idea of TOTALLY HATING SYDNEY. People aren't friendly in the centre of the city, there's an alarming number of them talking/texting on their phones whilst walking (it's a Saturday people, I don't believe for a second that you have absolutely, positively; got to make a phone call while you're walking), and for some reason the city just gave off a dirty/mean vibe. It's also not very clean (could just be that it was a Saturday afternoon, but there was a large amount of rubbish all over the central city areas).

Things began to change as I approached "circular quay". Sure it's kind of a touristy-place, but as I rounded the bend to be greeted by the world famous opera house, I started to get it. By the time I'd wandered through the botanical gardens and seen the hundreds of couples/families/groups all having an amazing day in the gorgeous weather... well I could start to see how people fall in love with the city.

I continued my walk, heading south-east toward fox studios; and although I was only 2-streets east of where I had walked into the city, everything was different.

sure, there were still hundreds of people yakking away on their phones, but they didn't seem to be as hurried and stressed. All the people that dressed-to-impress (whether goth, or bogan, or polished, or grunge-d; metro-ed, or retro-ed, or "what-the-hell-is-THAT?"), became a cosmopolitan mix of hundreds of little groups, finely defined and accepted (don't know which group I belong to yet - confused-medium-sized-city-film-technician-tourist perhaps?)

As I wound my way through some of the "better" inner-city suburbs, I could see the attraction of living here (although forget about parking a car on the streets... IMPOSSIBLE)

when starting out this afternoon, I was ready to hate it here, now I'm slightly changed in my opinion, I still prefer Brisbane (nothing compares), but now, after my 10+km walk, I can at least UNDERSTAND why people love it in Sydney.

NO photos this afternoon, as I felt it important to not focus on being a tourist (though I was scoping out the nice photogenic places - and I've got a feeling that It'll be quite fun with my camera in this city.)

Ian
Posted by Ian Thomson at 4:38 am No comments: 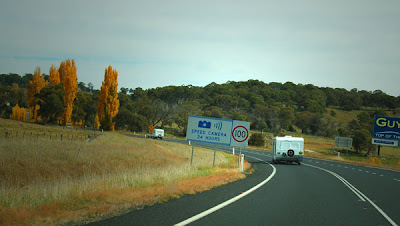 here's what I've learned from my little jaunt down the new england highway, from Brisbane to Sydney.

3 - the new england highway is REALLY like NEW england (seriously it felt like I was driving through some slightly browner english fields) I guess it may have been the Yellow leaves falling, and the general rolling hills

5 - Driving into Sydney on a Thursday night in peak-hour traffic is NOT the best way to be introduced to it's road-system. ARRRRGH, which lane (of the 8) do I need to be in, was I supposed to take that exit that's just done a loop-di-do? ooooooh that IS a pretty harbor bridge, $3? where was my option for avoiding the toll? Why does everyone insist on driving so aggressively; when the roads are narrow, and in fairly shoddy condition? it's impossible to park anywhere, I hate this place... and you've arrived at your destination. Perhaps I need to buy a SAT NAV.

first up is a shot of the stone-henge monument in Glenn Innes. 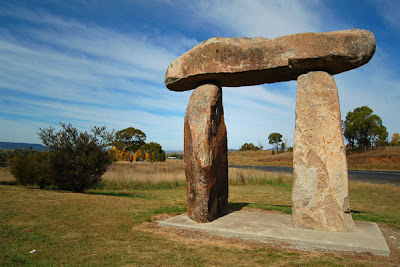 next is a shot of the rest area I stopped at when the pink elephants were swimming around my head too much to keep driving (I know that the pink elephants are more related to being Drunk than being tired, but I couldn't think of which animal circles around your head when you're tired, birdies are for concussion; hmmmm, perhaps I'm just too tired now as well.) also - if you squint, it ALMOST looks like a pink elephant.... no? 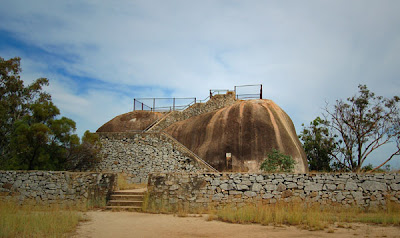 And now the view from the top. 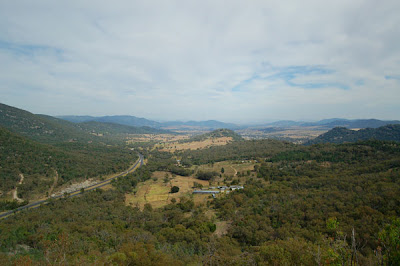 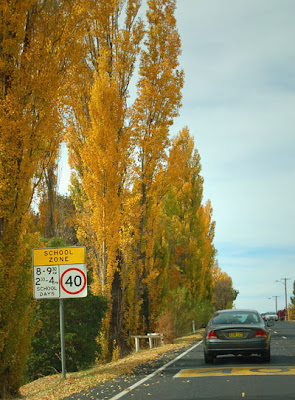 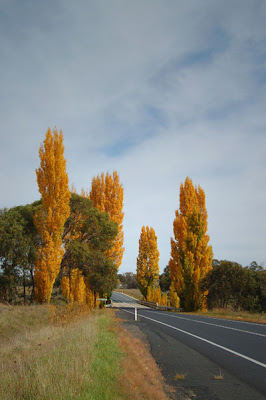 ever wondered how the line-markings are made on a highway - well that truck at the front drives along at about 20km/hr spraying the dividing line, and cars try to overtake it on the left (of course if you throw a caravan into the mix, things can get a little difficult.)

Finally; a shot of what looks like the "tree of life" as depicted in the recent movie, "the fountain" (whose soundtrack in on in the background as I write this). 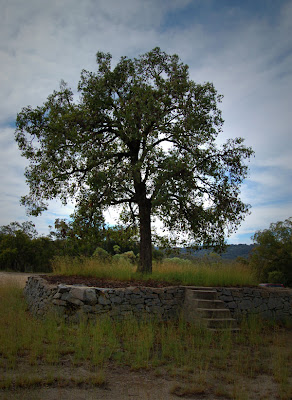 so I guess that's it, till next time

Ian
Posted by Ian Thomson at 9:10 pm No comments:

Welcome to my "blog" for the coming few months, as it's marginally easier than the web-site to update.

I'll be a Sydney local for this production, so that means no allowance for accomodation whilst at the studios. Luckily this shoot is mostly up north, therefore production will supply transport, accom., and Per-diems (yay).

I've narrowed my personal kit down to a manageable amount of stuff. Unlike past jobs where I've brought WAY TOO MUCH and ended up regretting it; this time I'm going slim-line.

even though it's almost 6 months of solid 5-6 day weeks, hopefully I'll be able to get some exercise on my day-off, and avoid the "feature-fat-gain" that has plagued me on past shoots.

any way, keep checking back here, as I'm sure I'll post fairly regularly.

even though I'm not allowed to shoot any photos on-set, I'll be able to take some nice happy-snaps of where I am.

Ian
Posted by Ian Thomson at 3:35 am No comments: