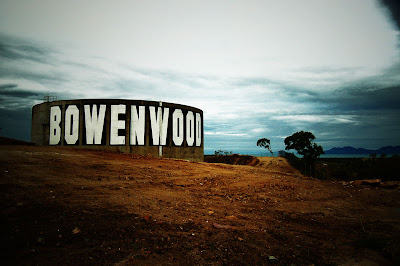 ...for 50 days you’ve been home. But come this Friday; it’s time for us to go our separate ways.

I know that we’ve had our little arguments, (your weather, for one);

But remember that you ARE beautiful, and I’ll always think of you fondly.

I’m just not ready for a long-term commitment;

I need to move on and see what the rest of the world has to offer.

Thanks for your hospitality, and your friendship.

The first part of our marathon is over: We’re flying to Darwin tomorrow - and hopefully (if the rain hasn’t stopped the building of sets out west)... Kununurra, WA.

It’ll be a little surreal to go from the smallish township of Bowen (no traffic lights), to the bustling northern city of Darwin; but I think that most of us are ready for a change. To be honest; the weather these past 2 weeks has been enough to fray even the calmest of nerves.

We’ve seen rain/torrential rain/mizzle/mist/hazy-rain/showers/cold-snaps/deluges/and trudged our way through quagmires of mud (mostly due to the Dust that we brought in...) In short it hasn’t been fun to drag cables around.

Hey at least I got good use out of my new gum-boots.

There’s no doubt that I will return to Bowen, however it’d be nice to do so during autumn or spring... and for a holiday... not a highly technical filming expedition.

See you all in Darwin.

Latest - From the ARCHIVES 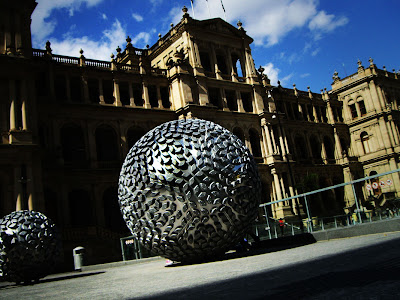 The strange silver ball thingys at Radcliffe place (opposite the Treasury casino), Brisbane

Well, we’ve finished in Bowen – and boy did we go out with a bang.

It’s no secret that a big part of the film revolves around the bombing of Darwin by Japanese forces. One of the last shots in Bowen involved the destruction of one of our sets by fire. 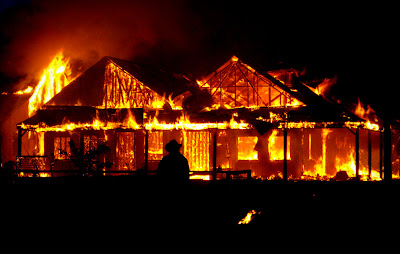 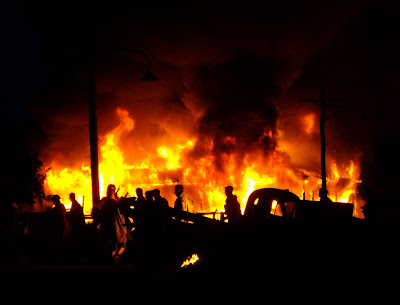 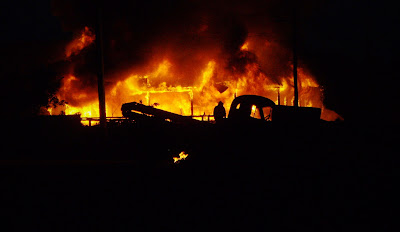 Also; a decision has been made in regards to the rain in WA; which was heavy enough to prevent the set builders from actually GETTING to the location to build the sets!

To allow them time to build; we are returning to Fox Studios in SYDNEY for a few weeks, our triumphant location-filming resuming sometime in August for a month-and-a-bit; before re-returning to Sydney for a larger Studio shoot.

On a sadder note, I lost my rain jacket today, which had faithfully served my precipitation-shedding-needs since its purchase in Vancouver during 2001 – you will be sorely missed (and quickly replaced I’m afraid). The jacket is added to a semi-exclusive-list of equipment I’ve managed to misplace in the last few days, including my new head-torch, and or course – my sanity.

Ok, see you all soon (especially those of you in Sydney).
Ian
Posted by Ian Thomson at 2:15 am No comments: 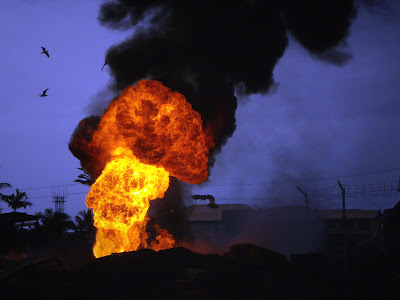 fire effects are cool though

Bowen is not weather-friendly at the moment.

We've been shooting in the rain for at least 4 days now (I've lost track of the time...) and now we're shooting on our Sunday, to try and catch-up. Nothing about shooting locations in rain is fun, not the cabling, the rain protection, the clothing, the total lack of sunshine...

here's one from the archives 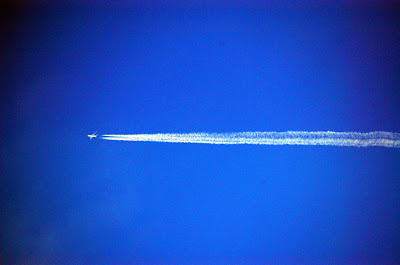 does this one need an explanation - just a cool shot of a plane and it's jet-stream.

Ian
Posted by Ian Thomson at 5:51 am No comments: 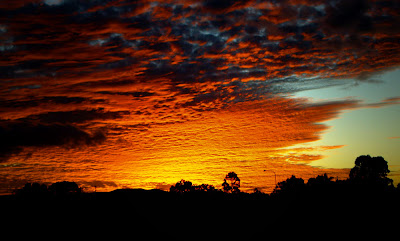 ...though not in the sense that many of you may be thinking.

Back in 2003 while enduring the torturous initiation training at Mt Hotham, we were introduced to the theory of “the 4 stages of seasonal jobs”. I know that it’s not DIRECTLY relatable to film making, but I think it’s close enough – especially when you throw travel; and crew you’ve never worked with, into the mix...

Stage 1 – FORMING; you’re meeting new people, starting a job for the first time (or with new people) - and trying to come to grips with its intricacies. (This is usually the quickest stage – sometimes only lasting a few days)

Stage 2 – STORMING; where you’ve made your group of new friends and are LOVING the time spent with them; you’re getting to grips with your job requirements - things are on the up-and-up, and you’re having heaps of fun.

Stage 3 – PERFORMING; the partying has quietened down a little, and your life is more of a routine. You are more-than-competent at your job, and can do it quickly, and skilfully (needless to say that THIS is the stage that management wants you to get to as fast as possible). This is also the longest phase, lasting MOST of the season.

Stage 4 – MOURNING; the season (remembering that the training was for working on a ski-hill) is drawing to a close, and the realization that you may never see your extremely close friends ever again, rears its ugly head; You’re still really good at your job, but get quite complacent, and things may slip through the cracks...


We’ve been in stage 3 since our first week in BOWEN. If I were a betting man (which I’m not – but that’s a story for another day...) I’d say the reasoning for the Sydney leg; was to get us all up to speed before hitting the road.
Depression can settle in during stage 3; As the slip from Storming, into the routine of Performing occurs; and we were warned to be on the look-out for fellow workers who were a little down.

So I guess it’s natural to be a little forlorn, and home-sick. Doesn’t make it any easier when the job is fairly physical, and the hours long.

It’s important to not fall into the throws of passion at this stage, (ironically it’s by this stage that most everyone is on the prowl...) it’s very tempting, but trust me – it hurts like you wouldn’t believe at the end of stage 4, so be on the look-out for those who are prone to flirting, and avoid them like the inevitable colds and flus that hit around this time of year... or you can buckle-in and just enjoy the ride...

In honour of my homesickness – please enjoy the most recent...

BONUS PHOTO FROM THE ARCHIVES...

Some photos of my hometown, Brisbane. 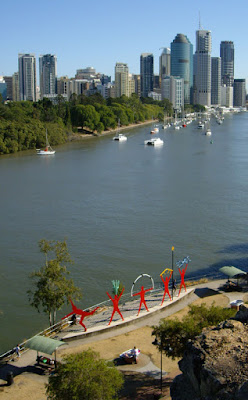 And a view from the Goodwill Bridge. 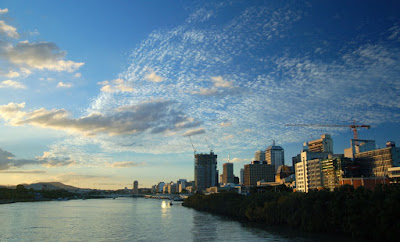 Cheers, and hoping that your lives are all moving along at a comfortable pace. (Whatever pace suits you best)
Ian
P.S. we’re on Nights shoots all this week, so apologies in advance if I’m not responsive during the day... I’ll be sleeping as much as possible
Posted by Ian Thomson at 2:59 am No comments: 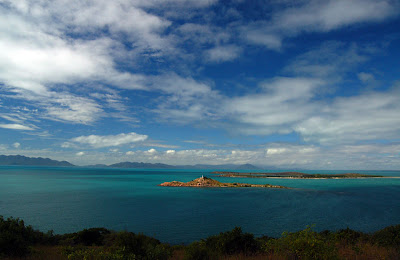 ...as you can see from today's photo essay.

Today is the 1st day off that I’ve been able to relax, walk around the town, and drive up to the look outs. 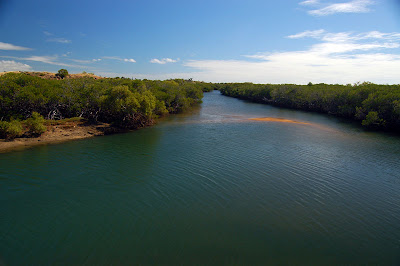 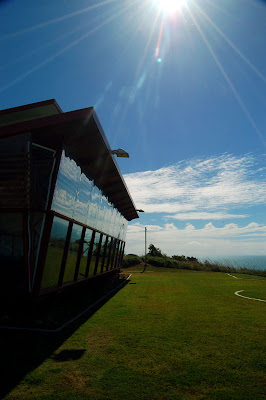 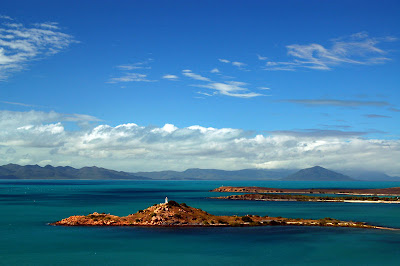 View of lighthouse from the flagstaff lookout 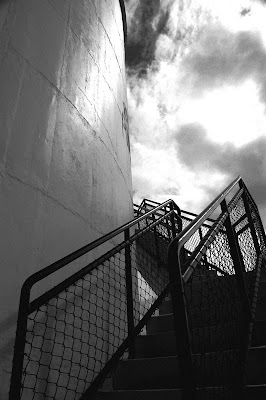 Stairs up to the local (Queens Beach) Lookout 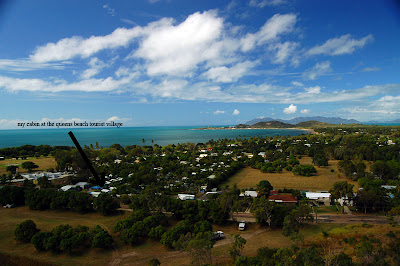 View from Queens beach lookout – I’m staying at the caravan park (next to the blue roof of the pool at my doorstep, mid-left of the picture) 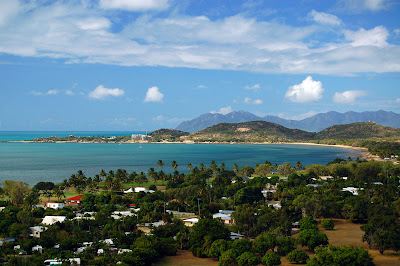 Closer view of Gray’s bay, which hooks around from Queens Beach. 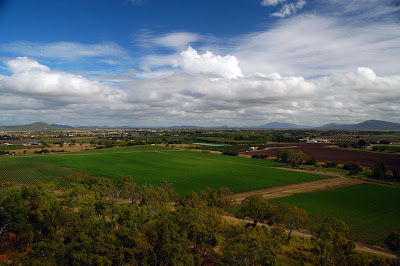 View from the other side of the lookout; farm-lands and pretty clouds. 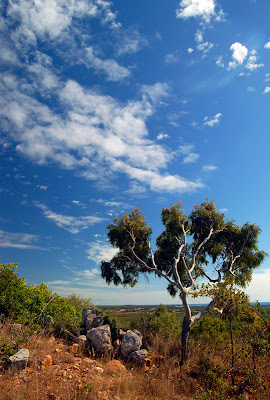 Awesome tree at the Flagstaff lookout.

Not much to say about the film this week, things are moving along, and it’s feeling a little more like work; but there are still a few moments each day when I get a kick out of what I’m doing...

Time for a new segment called...

Bonus Photo from the Archives. 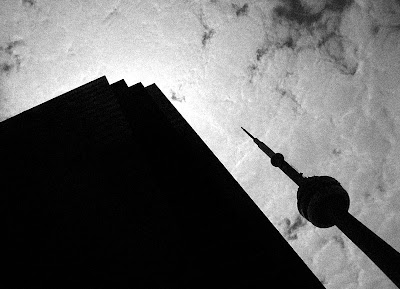 ok, that's about it from me for today - I'm off to enjoy the rest of my weekend.

Ian
Posted by Ian Thomson at 4:43 am No comments: