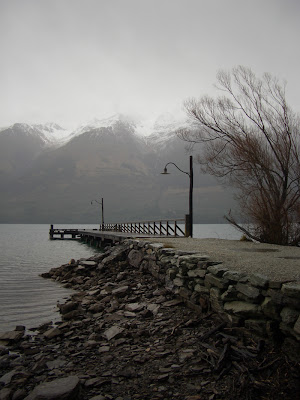 I guess it had to happen sometime, even if it seemed like it would never end.

We’ve wrapped. (Technically we wrap after today... I’m currently sitting in stage 7, as we set-up on one of our last few shots)

I’m now charged with cleaning and packing all the sound gear into a shipping container so it can travel during the holiday period, and arrive in NZ in time for the next film...

...Of which I can’t disclose any information – mostly because I haven’t officially been contracted yet.

Other things that have happened in the past month, or so;

• Saw a few more movies (INTO THE WILD = Good, BEOWULF 3D IMAX = no so much, SICKO = made me glad to be an Australian, SHOOT EM UP = fun, but nowhere near as good as HOT FUZZ {which I picked up on DVD})

• My car was broken into – stealthily, as they didn’t break any windows or destroy the door-lock. They did manage to completely TRASH the ignition in a failed attempt at stealing the car; and took my new-ish GPS system (which was well hidden, but uninsured)

• Subsequently I can’t drive home – instead I’m flying; then renting a car for a small break up the sunshine coast with my mum/sis/brother.

• I didn’t end up re-joining the gym, and due to the extra eating I was doing (and the added stress of recording on splinter unit), I un-did all the good work of the past few months, and feel a little out of shape.

• Attended a cool wrap-party. Not much more to say – ‘twas a fun night.

• I bit the bullet and FINALLY purchased a GOOD set of in-ear reference headphones (even with the online discount it was still about 10 times as much as most people would spend) and the sound is INCREDIBLE...

Okey dokey. That’s it from this neck of the woods.

If all goes according to plan; I’ll be taking a bunch of photos in NZ during late Jan 08 (hopefully they'll match the beauty of the one at the head of this post - which I took in 2004), so expect more from me then.

And a merry new year

Ian
Posted by Ian Thomson at 9:31 pm No comments: