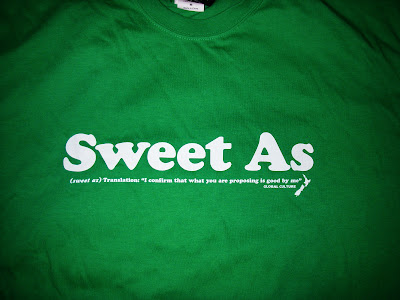 …nothing… It’s not a full sentence; and yet it can sum up so much. equivalent to; cool, no worries, and OK; “Sweet as” has a multitude of uses.

In NZ it covers everything.

The main unit is now in the process of shipping its-self back to Sydney for a few months. 2nd Unit remains on the south island shooting the jaw-dropping effects sequences that will surely astound audiences in May 2009.

I would have posted more often; if I were actually taking photos… It’s weird; but I feel more inclined to post on the blog, if I’ve taken a bunch of photos.
The job was not conducive to taking photos; hence the lack of posts…

Also, I stop taking photos once I’ve hit what I feel is my artistic limit (this is something that I can’t explain; and even more of a concern than the no-photo = no-post)

I hit it VERY early in the trip, and the following photo is my own personal pinnacle… 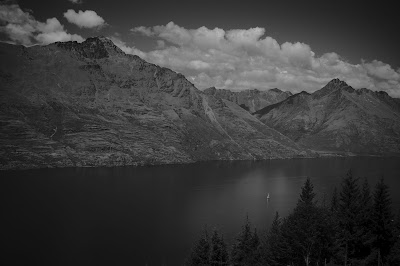 It’s a view from the hike I took up Queenstown gondola. And if I may say so – one of the best I’ve ever taken…

P.S. I’ve had a few very nice emails requesting information and photos, and thought I should point out that I’m not able to take any photos of the set. I’d be fired for sharing ANY information about the film (including photos); it’s just not worth the repercussions.


P.P.S The t-shirt was one of my few indulgences during the brief trip to NZ. I'd seen it in a Queenstown store, promised myself to purchase on a day off; and never got around to it. By the time I'd searched and failed to find it in Dunedin, my heart sank. it was an absolute fluke that Christchurch international airport has a global cultures store... and that they had one of the shirts in stock.
Posted by Ian Thomson at 2:43 am No comments: 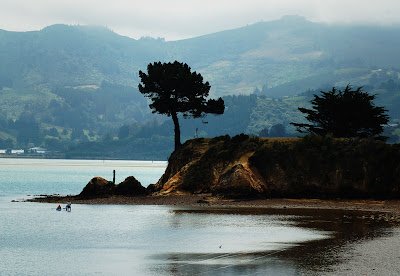 their public art gallery has a nice exhibit at the moment. Elizabeth Thomson's (no relation) "my hi-fi, my sci-fi".

Also on display is Monet's "le debacle" which is pretty impressive.

check it out, if you're in town.

If you do happen to be in town; there's a good chance that you're either:
1 - a student who's about to start classes (Dunedin is a MAJOR university town with over 20,000 students expected in a weeks time);
2 - Here for the MASTERS games (there's almost 8000 people expected)
3 - Possibly off a cruise ship, on your way to Antarctica?

Dunedin is a surprising little town, good food, a nice vibe, and a familiar climate for those who enjoy the cold.


we're back in town for a little while, shooting in the forests about an hour out of town (the pine trees feel surprisingly canadian, which always makes me happy), and closer to the city in an old cement works.

speaking of work, it's all going quite well.

don't know why I seem surprised; as we've got a fantastic crew, and amazing scenery - what more could you ask for.

the differences between this film and the last are as numerous as they are massive.

Not that either one was the correct way to do things, but it's almost a holiday to return to the regularly structured form of shooting feature films; and our pace has been a nice contrast as well.

One thing that has made me really happy is how good the local crew are; I was always expecting good things (i mean, c'mon; lord of the rings...), but damn... they've got the logistics of shooting in remote areas well and truly sorted. Everyone is really friendly, and it's got a chilled vibe that doesn't usually happen on bigger productions. it's almost enough to make me want to move here...

I'm having a small issue getting used to our lead actor's accent though... after 9 months of hearing him speak with a hearty Aussie tone, it's a little disconcerting to hear some northern american coming out. Then again, his previous character didn't have claws either... 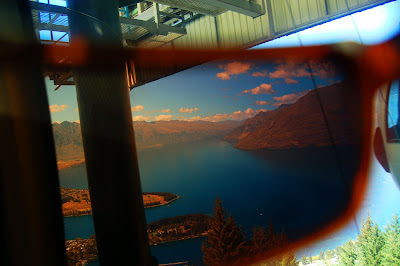 from the top of the queenstown gondola (which I hiked up, then caught down...) 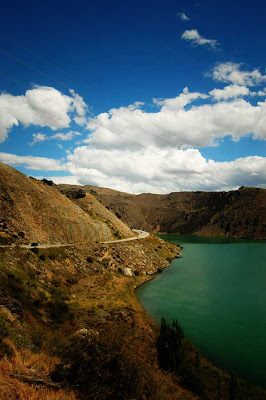 NZ is good, more photos of the landscape are coming; when I get a chance to sift through and pick the good ones...

Ian
Posted by Ian Thomson at 7:46 pm No comments: