This time I really have no idea for a title... 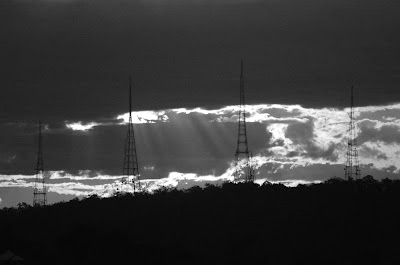 Yup; I’m truly stuck for something to write about. I guess that’s the reason for the lack of recent posting.

Work; is work. We’re back in the studios (obviously), and things are progressing quite nicely.

As much as we all enjoy the locations aspect of BIG film making (it’s seriously cool – with the sightseeing and travel and per-diems, and what-not) it still feels better in a studio.

When working in the comfort of a (mostly) air conditioned studio, there’s time to relax and focus on the storytelling without the usual demands of MOVING all the equipment and people all over the place.

Case in point – the Public Address Speaker system (Big speaker allowing the director to talk to people over vast distances) that is the usual bane of my sound assisting duties; didn’t move more than 3 times the whole last week; and my right shoulder would like to thank whichever deity allowed this to happen.

Of course when the equipment doesn’t move all the time, you can get stuck for things to do (if you’re not directly involved with the takes – like focus pulling/boom operating/acting/etc).

Consequently allot of the crew are shuffling around, trying NOT to make noise (failing miserably by the way). It becomes MY job to somehow quieten them, and try to lock-down any other noise that might render the performance of our lovely actors acoustically useless.

Actors’ shoes can make quite a bit of noise on hard surfaces, especially when there’s dirt to crunch. These “footsteps” are abnormally loud in relation to someone’s voice – so when you’re recording an actor’s dialog, all you can hear is a MASSIVE CRUNCH, where there should be the dulcet tones of their lustrous voice. The disconnect is even worse when you can’t see the feet of the actor with the offensive footsteps because they’re “off-screen”. (It’s truly weird to be hearing crunching during a close-up on the other actors face)

We have various ways of overcoming the problem (ranging from simply taking the shoes OFF, to applying a layer of foam). The best way however is carpet.

I’m now quite adept at laying down carpet quickly and securing it with gaffer tape so the actors don’t slip over. (NB – gaffer tape doesn’t stick to dirt)

If you don’t lay the carpet at the correct time (after they’ve laid dolly-tracks for the camera, but BEFORE they put down any focus-marks) people get miffed. There’s no way that they’ll give you a 5 min window to JUST lay the carpet, so a good percentage of my day is spent standing around, then trying to roll-out carpet whilst still getting out of the way as lot's of HEAVY equipment is wheeled around me

Once you get the carpet down. It’s time to prowl around the studio and shut things down.

• Why is that door open?

• How do you make the fire-detection-system shut-up?

• What can I use to plug-up the hole in the wall where the additional power cables are coming-in?

• How do I politely tell someone who may or may-not be extremely important (and way above my pay-scale) to be quiet during the highly emotional exchanges of our actors...?

Once you’ve bored yourself stupid trying to be a sound-nazi; it’s time to clean equipment, go for coffee runs, think about what you’re going to have for lunch, check your phone (for the time, missed calls etc) and eventually change a battery or two.

Such is the life of a sound assistant. Although I prefer the term Utility Sound; it implies that I’m more of a rounded person; plus I CAN mix if needed to, or even Boom.

Speaking of; I’m going to be booming for the next two weeks, as our regular boom op has some family stuff to attend to.

So we’ve shipped out our attachment from W.A. and he’ll be assisting (sorry... utility-izing?) until such time as either our regular-boomie returns, or I burn enough bridges by causing boom shadows and smacking people in the head that I go mysteriously missing and never come back.

Other things that have happened since I last posted.

• I joined a gym – as much as I HATE gyms (especially the pretty-poser-society that’s attached to them) I decided to do something semi-constructive with the 10 hrs I have to myself each and every-day. The local-ish gym is open ‘till 2200 four nights a week, so that means I get a good 1 ¼ hour after we wrap, to bash myself silly and return home completely exhausted, thus expediting the sleep-process...

• I saw a movie... no seriously, this is a highlight (as I hadn’t watched one in quite some time) it was the talking rat/chef one; and surprisingly less kiddie orientated than I’d ever thought possible.

• I bought a backpack. And when I buy a back-pack, you’d better believe I buy the heck out of it... as always, I went for a good one. (water-bladder/metal frame-chasis-thing/etc/etc) mostly so I can carry a set of clothes and towel whilst cycling to the gym after work; but also for when I next go skiing...

• ...I’ve made plans to go skiing... This was my first choice for a title to the post – but I decided against it because the dates are still not locked in, and it’s so far into the future (late Jan 08). Still; plans are afoot for a week-long tour of Hokkaido, JAPAN (powder capital of the world – where they measure snow-depths in METERES, not inches)

• I did some washing. Ok moving along...

• Purchased an e-tag for the car (now I can use ALL the toll-roads in Sydney without fear of needing coins – yippee?)

• Had some fish and chips at Bronte beach, before swimming in the natural baths (man is it still cold.)

• Found some Burt’s Bees lip-balm online (well ebay actually) and am eagerly awaiting it’s arrival. For those of you who’ve never had the pleasure of the peppermint lip-balm from Burt’s bees you’ve never really lived. (yes I’m aware just how ridiculous I sound here, but my girlfriend at the time got me hooked on the stuff back in 2003, and I’ve never been able to find it in Australia).

Well that’s about it since I last posted. I don’t think these will be regular anymore as I’m struggling to find anything useful to blog about.

Plus – I’m running out of

PHOTOS from the Archive... 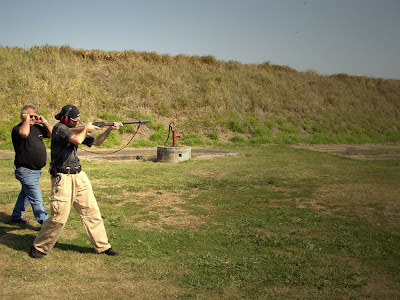 That’s me, the only time I’ve ever fired a gun (it had a blank round in it)
Post-wrap on “convictions” 2004 - which has just been accepted into the “BIG BANG” film festival in Philadelphia, USA.

Ian
Posted by Ian Thomson at 4:21 am No comments: 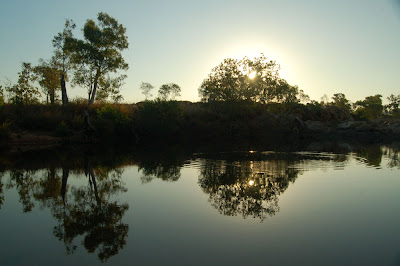 ...more specifically, I love the things that I get to do in my job.

How many people can say that they’ve recorded the rushing waters of a fast-flowing, croc-infested river-crossing whilst driving single handed, sticking a microphone out the drivers window... At night...

Or sat by yourself in the centre of over 500 head of cattle; 100s of kms from the nearest “city” with only the milky-way lighting your way... (I’m guessing a few more than the river –crossing thing)

In what other profession do they pay for your accommodation, transport, and food; then give you access to a massive dried mud-flat to play cricket on as the sun sets...

Where else can you watch over 1100 cows being mustered by helicopter; whilst a 6-wheel ATV races alongside and a massive wire rig floats a camera mere feet above their heads...

There are of course; downsides. 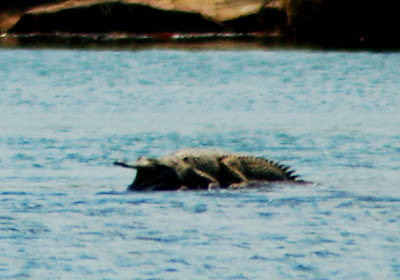 Many full-time film technicians are lonely souls; so devoted to the pursuit of these amazing sights and experiences, that it’s difficult (if not impossible) to maintain a normal life. 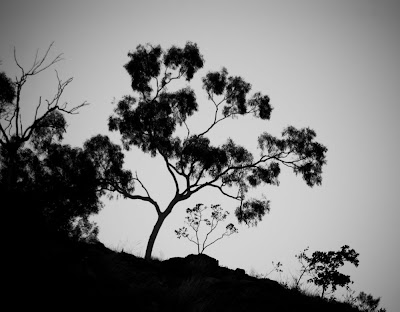 I don’t have any hard statistics, but I’m sure the failure-rate of relationships in the film industry is higher than most others.

It takes a certain type of personality to subject themselves to the “instability” of feature film production. They often work VERY HARD in a short period of time, then not at all; until they get the chance to try again.

That chance may be mere hours after their last job had finished, or months – there’s no telling what will make a crew person (or talent for that matter) hireable.

How do you buy a house; start a family; if you’ve no idea when the next paycheque is coming.

Sorry for the rambling post – but I’m in a reflective mood right now.

This time tomorrow I’ll be back on Main Unit in my usual sound assisting position.

It’s been an amazing run, and I always knew it would come to an end. Just didn’t want it to.

You can expect my posts to become more sporadic as we finish-up in Kununurra throughout the next week, and return to the stages of Sydney.

Once there, I’ll have less to post about (if anything); and it’ll all return to normal as we plow through the interior scenes of this epic film.

It’s been a wild and crazy location shoot, but one that I’ll remember fondly.

PHOTO FROM THE ARCHIVES 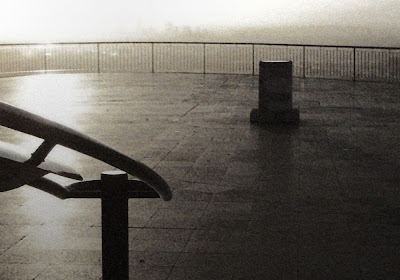 Friday 7th September 2007
UPDATE – it’s been almost a week since I composed the entry above.

We returned to Diggers Rest – this time with the full cast and crew for a few days of mad scrambling in the DUST and WIND.

I was bumped up to Boom Op for those days, as our regular boomie had to return early to Sydney; and I have a newfound respect for the sheer amount of work that he does during our shooting day.

I fly our of Kununurra tomorrow. It’s done. There’s a small unit cleaning up various shots here and there, but the majority of us are moving onto the next component of the filming – Studio work in Sydney.

The landscape is still breathtaking; even after 5 weeks of it. If you ever get a chance to make your way up to the far north west – do it.

Ian
Posted by Ian Thomson at 1:22 am No comments: